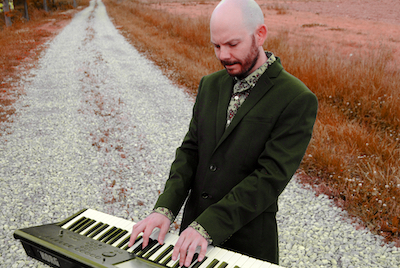 Chris Hoffman was born in Cleveland, Ohio and from the time he was born he was always into performing and entertaining family, friends, and anyone he could. He began getting into music by making tapes and listening to records. He was always surrounded by new music and was heavily influenced by his family in general. At the age of 5 he was dancing to Achy Breaky Heart by Billy Ray Cyrus and had a CD single of I Can’t Dance by Genesis. He asked his dad “What does he play?” not understanding the concept of a band at the time and his dad said “Who? Phil Collins?” Chris said, “Yes, what does he play?” His dad said, “Oh, he plays drums.” The very next day Chris pulled out a pair of novelty drum sticks his grandparents had given him and began hitting the pots and pans in the kitchen. Soon after, his parents bought him his first toy drum set to play on. After playing on multiple toy drum sets and breaking all of them his parents went to the store and bought him his first real drum set. It was the brand “T.K.O.” Chris was on his way home from school at the age of 8 and was with his friend Ben. He walked in the house and onto the back porch. Suddenly, he heard his dad playing drums in the basement. When he ran down there he was surprised with his first real drum set. This set didn’t have a hi-hat or a drum throne since they had to be ordered and weren’t available at the store. This didn’t stop him from playing. He played standing up for the first month and learned how to play this way. Till this day Chris still stands up when he plays because of this.

For the next few years Chris played in his basement every single day for hours. He would put on fake concerts and even had a fake band called “The Yaking Haks.” He would make fake tickets, write down tour dates using a globe he asked for from his parents, and charge people to attend his shows. His biggest influences growing up were Phil Collins and John Bonham of Led Zeppelin. During the song “Money” by Pink Floyd he would have a jar filled with change. He would shake it up and throw a large amount of change at the crowd creating a huge mess his mom disapproved of. His Uncle was a drummer and had a jam band with a few guys. Chris would sit in and play with these guys. Around this time and the age of 8 Chris began sounding good at the drums rather than some obnoxious kit hitting things with sticks. He could keep a beat and hang playing Allman Brothers, Van Halen, ZZ Top, Santana; many Blues and Classic Rock standards. His first concert was at the age 8 and he saw Pink Floyd at Cleveland’s Municipal Stadium. He rocked so hard he threw up in the parking lot from all the weed smoke after the show. He also got to hear Wish You Were Here from the bathroom stall as the entire stadium along with the men in the bathroom sang along. Chris then saw Phil Collins for the first time, Jimmy Page and Robert Plant, and it all really began to take off. Chris’s Uncle got a new drumset and gave Chris his old one to play on. This was a huge upgrade and Chris had an even nicer set to play on. Years later his Uncle gave him another new drum set to play on when he upgraded again.

Chris started getting more into Alternative and Grunge bands like Green Day, Stone Temple Pilots, Live, and even Guns N’ Roses just playing along to the drum parts. At 11 he joined his Middle School Band which he began learning to read musical notation. He played in Jazz Band, Concert Band, and learned more and more music theory. He made so many friends in the music program and one friend in particular Tim Hampton really helped him along with reading music and getting where he is at today with it. In High School he continued with the school music program and did everything he could possibly do. He played in Jazz Workshop, Jazz Band and Percussion in Concert Band, Symphonic Band, and Wind Ensemble. He did Marching Band which till this day is one of his favorite times. He played Snare all 4 years of High School and was Section Leader for 2 years. He played in Symphonic Orchestra and participated every year in Solo and Ensemble contests. Throughout this time Chris started playing piano along with learning how to play Mallet Percussion. He was extremely busy and just wanted to expose himself to everything he could musically.

His Junior year of High School a group was started called The Lakewood Project. The idea was to mix an electric orchestra, an acoustic orchestra, and a rock band all together. This project was a huge undertaking for the school since no school in the world had done anything like this before. Chris auditioned and made it on drums. They played mostly Classic Rock along with Classical standards but in this format. Their first show was at the Rock and Roll Hall Of Fame. Chris opened the night with Stairway to Heaven and will never forget playing to the sold out crowd and hitting that drum fill at the beginning. This was the moment Chris knew he had to play music for the rest of his life and there was nothing else he could possibly do. He also got to go to Texas and play with this group. The Lakewood Project is where he would meet future band mates bassist Tony Howard and guitarist Scott Young. The Lakewood Project is still running strong every year and in 2013 Chris played their reunion show.

After High School Chris was excepted into Berklee College of Music but did not attend due to financial reasons. Even with scholarship money he could not afford it. He went to a local Community College to study music but dropped out after a year. Instead, Chris began playing with Tony and Scott. Their first group together was called The Tenth Planet. This was a power-trio instrumental progressive/funk/metal band. They recorded some songs but only played these songs live once in Pennsylvania. It was one of the most memorable and fun shows ever. Tony, Scott, and Chris also played in a group called Merry Magdalene. This was a hip-hop group with a live rock band and a Rapper as a front man similar to the idea of Rage Against The Machine. When this band ended the three of them joined up with a female lead singer and formed the group Candy Cigarettes. This was a cover band he had joined to play gigs and make some money. This group went for a little while but also ended. During this time Chris also filled in with the Blues band Fletch and The Catch for some gigs. After Candy Cigarettes, Scott and Chris joined up with Mike Gray who was in Percussion with Chris throughout the years; Only now Mike was playing Piano and singing Lead Vocals. They formed the group 70 Lewis with another guitarist Taylor Netzler they knew from school. This was a huge original project for Chris. They played every venue in Cleveland they could. This band played Pop/Piano Rock but with more of a musical edge. They often compared themselves to Coldplay or Ben Folds Five but heavier at times. Taylor eventually left the band and was replaced by Kenny Kerns who played just about everything. This band spent years creating their first and only official full-length release “East Coast Sunday Morning.” This album meant so much to Chris as an artist. He wrote half the lyrics on the album which were all about very personal times in his life. He also was able to write and perfect his drum parts with complete creative freedom. This band lasted a total of 5 years and eventually had a falling out. In Chris’s opinion they had hit a wall in Cleveland and did all they could here to promote themselves. They needed to be somewhere they could get the exposure they needed but it never happened. During 70 Lewis, Tony, Scott, and Chris continued playing in multiple different Cover projects such as Rock Monument and Cover Band The Band. These bands also disbanded.

After 70 Lewis Chris started playing in multiple groups. The first was the group Pop Fiction with female vocalist Amrene Smith. Scott played guitar with Pierson Trimarchi on bass and Alex Sorboro on Keyboards. This band was meant to be a top 40’s/Pop/Dance group. The idea was to always be super current with the Top 10 Billboard and to be a complete dance band. Chris has been in this band for 2 years and just recently left the group. He will be playing out the rest of the dates on the calender for 2013. Chris also joined an original group named Mouth Wired Shut. This was Chris getting back into heavier music and more Alternative Rock. He started out as a fill in guy but became a full time member. They recorded a 5 track album called “Firestarter” in New York with Mike Watts at Vudu Studios. Chris has also been playing full time in The Wedding Crashers and RadioNow playing more top 40 covers. He fills in whenever he can with Radioactive, Shagedelics, and Weird Science. Pretty much, Chris is always looking for gigs and work as a musician playing out every weekend and living the life.

Chris, at 28 years old moved to Los Angeles, CA. He played primarily with Southern Rock artist Glitter Rose. He met her at a show at Witzend in Venice. While Chris was with Glitter Rose he played all of the big Los Angeles venues like The Viper Room, House of Blues, The Mint, Lucky Strike, and more. He was able to play shows throughout all of California in Modesto, San Luis Obispo, and San Diego. He recorded all of the drum tracks for Glitter Rose’s album “Outlaw In Love” This was a great experience and has taught him a lot regarding how to move forward in the music industry. While in LA Chris also played shows with Cold Chinese Food, a Modern/Alternative Rock cover band. He went to jam nights whenever he could and sat in on drums with Gary Ballan at The Rack in Woodland Hills. He also recorded a full album of tracks for Tom Ricci in downtown LA. Chris is always looking for new opportunities. He is now back in Cleveland, Ohio and currently the full time drummer for Radioactive. He has been gigging consistently with Radioactive playing Weddings and Private Events. He is also a member of the groups Jellyz & Jamz and Chalice of Malice. He recently wrote and recorded his first solo EP. He began playing piano and singing more seriously. The EP was written as gift to his wife as a wedding gift. He plans to continue writing and recording songs as a solo artist. Between his solo material, Radioactive, Jellyz & Jamz, and Chalice of Malice, Chris keeps busy. He also continues to look for and is interested in new opportunities. He will always keep busy doing what he loves most, writing, recording, and performing music.